Windows 10 and the Future

Windows 10 has been out for a little over 4 months now. I’ve had it installed on a vitual machine since then. I like to see what’s coming, and get a grasp on it. In the past, with Windows 7, 8, and the 8.1, and the 10 (up to now) betas that is all I’ve every done. Then my desktop started giving me problems.

Let me lay a little bit of ground work. I usually reinstall the OS on my desktop every 12-18 months. I like the feel of a nice new install and it just makes things run a little smoother in general. I work with a lot of programs that push my computer to its limits. And, I like using the newest things that my system has to offer. So, a couple months ago Windows started being sluggish, it was fairly common for it to crash in the middle of something, and some programs just would even start. It seemed like a good time to reinstall. But instead of reinstalling 8.1 I decided to jump up to the pre-release version of Windows 10.

Unfortunately, it was not a simple process, but that is why this is still a technical preview. I tried the upgrade path first. Which is installing Windows 10 over my existing Windows 8.1 installation. The best part, had it worked, would have been not having to go through and reinstall all the software that I use. It seemed like the update had worked until things still kept crashing, I couldn’t search for anything, and other various problems. After several attempts at fixing things I gave up and decided it would be easier to do it fresh. 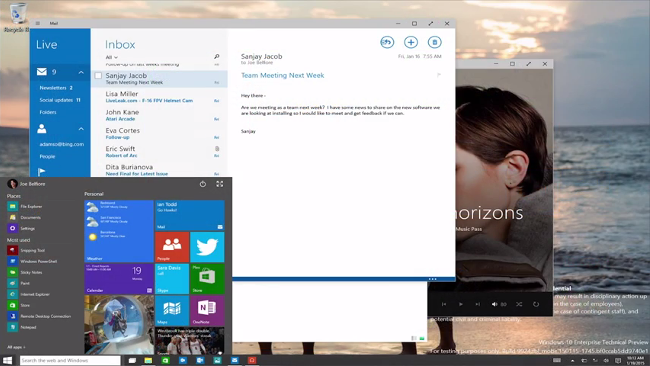 Fast forward 12 hours and, Tada! I working install of Windows 10 on my desktop. I discovered a couple of problems that I needed to fix along the way, but everything is now up and running. My system no longer crashes, and everything is working as it should.

Different from most people I found Windows 8 to be extremely efficient, more so than even Windows 7. Some of the shortcuts and features that were added become indespensable to me. (The Start Screen is WAY more useful than the Start Menu once you get used to it.) When I first saw what would become Windows 10, I was upset that Microsoft had given in, and gone back to the start menu, but now after using it, and seeing what the new Menu can do, and the flexibility it provides, I have to say its good. The more I use Windows 10 the more it feels like a nice hybrid of Windows 7 and 8, plus a lot more (I mean Holograms!).

At the latest event one of the biggest things that they showed off that sold me on this new direction Microsoft is heading is the idea of universal applications. Everything is so connected anymore the idea of being able to pick something up right were you left off on a previous device just seems great. Apple has been doing this to an extent for a couple years with systems like iMessage, and Dropbox has been making it easy to make sure that all your content is anywhere you need it. What makes Mircosoft’s approach different is that beyond having your files follow you, your entire application can follow you. Windows 10 is not just for the desktop and laptop, but the same system will end up in tablets, phones, and even the Xbox. That means an app that is written for Windows 10 has the ability to run on all your devices. It takes a lot of the things that are becoming more common with cross-device encounters, and making it more seamless.

There are a lot of things to look forward to with the offical release of Windows 10. There are also a lot of things that Microsoft has to be careful not to mess up. People are upset with Windows 8, which while I don’t agree with that I do understand, and this is their chance to show that they can innovate and make an awesome platform. One of the best parts is that Microsoft is actively looking for feedback on the platform and how they can improve it. Expect more as I use Windows 10 over the coming months.

For more about Windows 10 you can read it here or if you want to download and use the technical preview, which you should proably only do if you know what an ISO is and how to setup a VM, then go here.